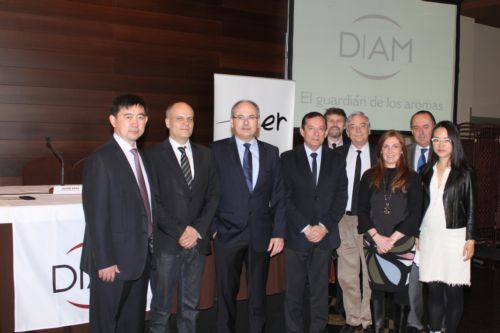 On Tuesday 9th April approximately 140 professionals from the wine sector were present at the sixth technical day organised by Diam Bouchage in Logroño.

The conference, entitled "Objective China: wine productions that will ensure a successful premium position in the Chinese market”, took place, as every year, in collaboration with The Association of Rioja winemakers.

José Luis Lapuente - DG ‘Rioja Regulatory Council’ - and Enrique Fontana - delegate for the Institute of Foreign Trade in Rioja - presented the existing and future opportunities for the Rioja designation in the Chinese market. "Compared to its competitors, La Rioja is a region that offers both modernity and tradition" emphasises J.L. Lapuente. In order to overcome the current paralysis in this market, he believes it is necessary to focus on the education of Chinese consumers and invest in communication. This year the promotional budget for La Rioja totals 1.5 million euros.

Enrique Fontana presented the figures for wine consumption in China, now the 5th largest consumer of Spanish wine, and the various, foreseeable distribution channels. HORECA "currently represents 72% of the sales but only 49% of the volume" of wine distributed in China. Online sales are rapidly increasing yet at present they account for only 6.3% of the total market.

Demei Li, presented by The Drink Business magazine as one of 10 most influential consultants in the wine world (http://www.thedrinksbusiness.com/2013/12/top-10-most-influential-winemaking-consultants/3/) discussed the behavioural aspects of Chinese consumers and their tastes in terms of wine.

It should be noted that although the consumption of alcoholic beverages may be high in China, wine is not yet particularly widespread. Producers must therefore address the younger generations in order to enter the market. The price is also an important factor as a bottle of wine is often considered a gift: "the more expensive the bottle, the more luxurious the gift".

Chinese consumers tend to prefer ‘soft and fruity’ flavours, ‘acidity, potent tannins and a high degree of alcohol are characteristics that are more appreciated by true wine connoisseurs rather than the general public’, but the ‘oaky’ influence is not a determining factor.

In addition to advice regarding the choice of importer, Demei Li urged wine growers to not merely reproduce the marketing pattern used in Europe or the Americas, but to learn and truly understand Chinese customs and habits. He mentioned for example that food and wine pairings are almost impossible as Chinese cuisine blends many different kinds of flavours and textures in the same meal.

Blogger, taster and expert in the Chinese wine trade, Jia Peng spoke to us about the importance of image and marketing when trying to enter the Chinese luxury market. The weight of the bottle, a refined label, the colour of the advertisements, everything is important. However, the real key to success lies in the translation of the name and the slogans.