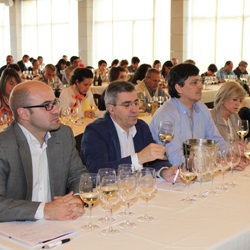 For the 4th consecutive year, Diam Bouchage, in collaboration with the Association of Oenologists from La Rioja, organised a meeting with professionals in the sector for its annual technical day.

About one hundred oenologists and winegrowers from the Rioja region met on 13th June this year to discuss the role of women in the winemaking industry: from grape to glass.

On the programme were conferences, a roundtable discussion and wine tasting.

• Julia del Castillo, oenologist – director of the Spanish Wine and Women competition, concourso Vino y mujer: what is the place of women in the world of winemaking and what is their approach to wine?