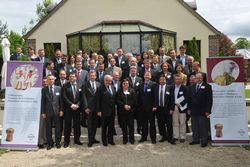 On the strength of its success with the Burgundy winegrowers (see article dated 11th April 2012), Diam Bouchage repeated the experience in the Champagne region with the first Mytik DIAM Meeting, held in the lounges of L’Hostellerie La Briqueterie in Vinay on the 15th June.

Many participants from the world of Champagne attended the conference given by Jean-Pierre Raffarin on the Chinese market and the development opportunities for champagne wines.

With one million bottles sold in China, Champagne wines pale in comparison to their Bordeaux cousins. Indeed, as Jean-Pierre Raffarin pointed out, “There are more Bordeaux wines sold in China than are produced in the Bordeaux region”. Nevertheless, he did go on to add that, “thanks to its French cultural dimension and its image, champagne should blend in perfectly with Chinese culture. The Chinese people see France as a romantic country that is closely associated with luxury; luxury being synonymous with culture in their opinion.”

What is more, champagne is seen by the whole world as being an intrinsic part of celebration: “which gives even more reason for cheer, given that the Chinese have over 50 celebrations a year!”

This highly informative analysis delighted the participants who continued their discussions after the conference around the table where lunch was created for the occasion by top chef Michael Nizzero, who served an array of delicious food accompanied by champagne.